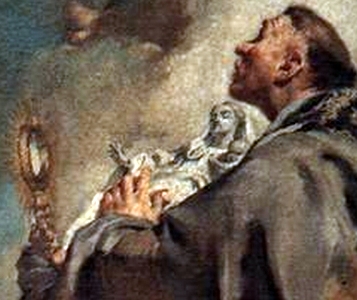 St. Hyacinth, a man of great faith, was not to be overcome. Born around 1185 to a noble family in Poland, he was thoroughly educated and even obtained the title of Doctor of Law and Divinity. After his ordination as a secular priest, he traveled with his uncle, the bishop of Krakow, to Rome where he became a follower of St. Dominic after witnessing a miracle performed by the saint.

After a short time, St. Hyacinth and his companions were received into the Order of Preachers and sent back up north to evangelize Poland and the surrounding countries. It was during this time that, after celebrating Mass, St. Hyacinth received word of the invasion of the Tartars, a Turkic-speaking tribe from Mongolia. He rushed back up to the altar to save the ciborium containing the Blessed Sacrament and turned around to flee the church. As he was running past the large statue of the Blessed Virgin Mary, he heard a voice saying,  “Hyacinth, my son, why dost thou leave me behind? Take me with thee and leave me not to mine enemies.” Although the statue was of heavy alabaster, St. Hyacinth was quickly able to lift it as it became very light. When he and his fleeing companions came to the bank of the Dnieper River, he commanded them all to follow him as he ran across the water as though it were land, leaving behind his footprints.  They obeyed and all were saved from the Tartars. Tradition says that St. Hyacinth’s footprints could be seen for centuries afterwards when the water was calm.

In August of 1257, Fr. Hyacinth fell ill with a fever. On August 14th he was warned of his upcoming death, so the next day, the feast of the Assumption, he celebrated his last Mass. Later that same day, he passed to his eternal reward. Canonized in 1594, his feast day is August 17th.  His tomb is in the Basilica of the Holy Trinity in Krakow.

Because of his years of hard work to evangelize Prussia, Pomerania, Lithuania, Denmark, Sweden, and Norway, St. Hyacinth of Poland is venerated as “The Apostle of the North.”